It was May 2004, and Alex Cora was up to bat in the seventh inning of a game against the Chicago Cubs. I looked it up for a few details, but it’s the first thing I thought of when Cora’s name was in the news the past few days.

That night, in a game I was watching on ESPN, Cora — then a Los Angeles Dodgers reserve infielder — fouled off 14 pitches and ended an 18-pitch at-bat with a home run to right field. It was simply an amazing few moments of hitting.

I liked Alex Cora then, and I was pleased that he got the job as manager of the Boston Red Sox 13 1/2 years later.

As a Latino, I’ve always gravitated more to players of such descent. Mexicans. Mexican Americans. Venezuelans. Dominicans. Boricuas. Nothing against others of other backgrounds. Just something that always mattered more to me.

But for Alex Cora I have lost a great deal of respect.

He cheated. Knowingly. Affected legacies. Affected championships. Affected the integrity of a game that seems to always need more of it.

Cora was named in an MLB investigation into stealing signs, from his time as Houston Astros bench coach in 2017. Commissioner Rob Manfred said Cora was among those who “originated and executed” some parts of the cheating scheme, one in which the Astros figured out catchers’ signals to pitchers and banged on a trash can with a bat near the dugout to let hitters know which pitch was coming.

The scheme also involved a center field camera and a TV monitor near the home dugout at Minute Maid Park.

Cora was certainly not the only one involved. Fellow Puerto Rican Carlos Beltran is out as Mets manager, agreeing to step down because of his involvement in sign stealing during his time as an Astros player.

Beltran was on the job two months and never got to manage a single game in a Mets uniform. Another baseball lifer who will have to carry this around with him for the rest of his life.

Maybe one day more specific Astros players who took part will be named and more details will come out. And those players’ careers will be tarnished. Beltran is guilty, but shouldn’t be the only one hung out to dry.

Manager A.J. Hinch and GM Jeff Luhnow have been fired. But the Astros are about to become MLB’s pariah in 2020 and maybe even beyond that.

It’s a certainty they’ll be booed in every stadium they visit. Just wait until they play the Yankees in New York. 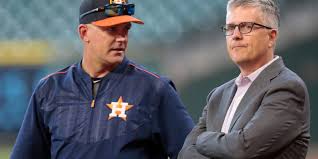 Baseball fans were to believe that the Astros were set to be a dynasty, with names like Altuve, Correa, Springer, Bregman, Gurriel, Alvarez and more. Players still with upside.

But to what extent were they involved in this?

They could have been two-time champs, had they not lost all four World Series games at home to the Washington Nationals in 2019. It really makes you wonder, how did the Nationals accomplish that?

The Dodgers were victims of the cheating in 2017, their best chance at a World Series title since 1988. That stings just to even think about, as someone who has followed the Dodgers as close as I have since I was child.

I don’t think we have heard or seen the last of the fallout from this scandal. And I don’t buy the argument that big deal, every team steals signs. Certainly not in the elaborate fashion the Astros used.

Baseball already is going through a tough time trying to reach a younger audience. It didn’t need a cheating team and manager from two successful markets.

It’s time to give credit to those journalists who broke this story and those who followed it. Those who posted videos on Twitter in which one could hear the banging of trash cans to signal a type of pitch coming.

MLB levied the biggest punishment it could on Hinch and Luhnow. It besmirched Cora’s name, but Cora knew what he’d done and couldn’t escape it once an investigation was launched.

The question is, are one-year bans and $5 million fine and lost draft picks for two years enough of a price to pay? That seems like to small a price to pay.

Alex Cora, from all I have read and heard, is a good guy and he knows the game and how to relate to players. He also did so much for his native Puerto Rico after the hurricane that destroyed the island.

But he took cheating to a higher, more intricate level, and in so doing took part in something for which he should never be forgiven.

It would be shameful (and yet not surprising) if he and Beltran have now made it harder for Puerto Ricans to get jobs as MLB managers in the future. But they knew what they were doing and have only themselves to blame for any such fallout.