Google “quotes about opportunity” and you’re bound to find hundreds of thousands of links devoted to quotes. It takes a bit of research to find out if the quoted are accurate or not, but I found a good one for where I found myself today.

“Opportunity is everywhere. The key is to develop the vision to see it.” – Anonymous

The Shock have a history in Spokane, but they are writing a new one with their IFL team this season.

Despite seeing success in their first season in 2016, the 2017 season brought a double whammy of disappointment. The team missed the IFL playoffs and then owner, Nader Naini (who had purchased the team from inaugural owner, Brady Nelson), announced that the franchise would cease all operations.

In 2019, former NFL (Seattle Seahawks) defensive tackle, Sam Adams, along with three other investors, purchased the franchise and all trademarks/rights to the team.

Which brings us to today. 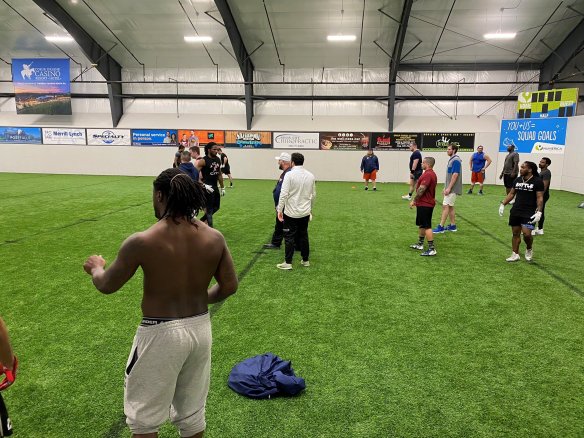 Having never seen an indoor game live – yes, I’ve watched them on tv – I was curious to see what today’s open tryouts was all about. Living in a non-NFL city, this was an opportunity for me to see a different side of pro football.

Players from all walks of football life attended today’s tryouts. 18 players in total attended the tryouts.

Former indoor and outdoor players all looking for their opportunity. Some with connections to the Spokane Wolfpack, a local team currently playing in the Northern Cascades Football League, came out for tryouts.

And some, like Keenan Williams, were there simply to find out where they are at. Williams is a former Eastern Washington Eagles (FCS) starting defensive end from 2015-2018. According to Williams’ father, Bryan, Keenan is coming off a knee injury. He plans to participate in Eastern Washington’s pro day next month.

Looking at the current roster and recent signings, the Shock roster is littered with players having pro experience, including in the NFL.

First day of Shock training camp was held yesterday. The Shock open their season on the road on March 22 at the Bismarck Bucks. They open their home slate on March 26 against the San Diego Strike Force.

Both the Bucks and the Force have already played their first IFL game today, March 8. The Strike Force won, 50-36.

The Shock will be cutting down their roster to the 25-player limit tonight. Whether any of these tryout players make the team or not remains to be seen. The IFL is a fast-paced game and require even faster adjustments.

Regardless, a tip of the hat to these guys for seizing this opportunity.

As for here at Somos Sports, we’re seizing this opportunity too. I’ll be doing my best to follow the Shock this year. I’ll be covering their home games starting on the 26th of this month. Follow along here, on Twitter or Instagram.